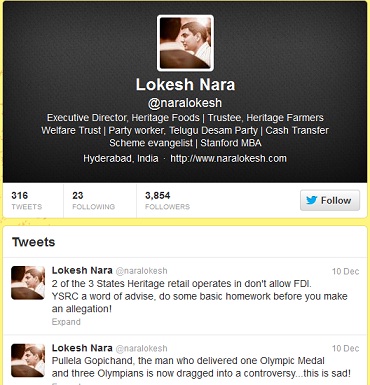 That Nara Lokesh is active in TDP politics is no secret now. He has been  conducting regular and daily meetings with important party leaders on all issues and problems nowadays. He is reportedly giving advice/instructions on how to go about party work.

On the other side, Lokesh is trying to get closer to the public through the internet. His views on various political developments can now be read on his twitter handle @naralokesh, where he describes himself as “Executive Director, Heritage Foods | Trustee, Heritage Farmers Welfare Trust | Party worker, Telugu Desam Party | Cash Transfer Scheme evangelist | Stanford MBA”.

His last tweet was on allegations of Heritage getting benefited by FDI decision. His take:

“2 of the 3 States Heritage retail operates in don’t allow FDI. YSRC a word of advise, do some basic homework before you make an allegation!”

His comments focus mainly on Jagan and YSRCP. Following are some of Lokesh’s twitter remarks.

“YSRC and Saakshi questioning TDP, what a joke! Why did Jagan Mohan Reddy vote for Pranab as president? And abstain from voting against FDI?”

“Funny, YSRC keeps saying Jagan will get bail. They don’t say he will be acquitted…”

“YSRCP is having to purchase MLAs when their surveys are predicting a sweep!! Wonder whether they paid more for fake survey or MLAs… “