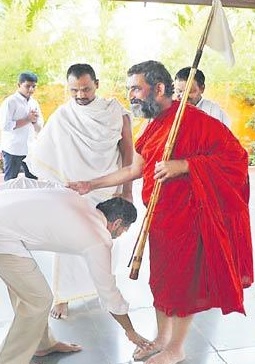 The TRS Party and the Telangana government are taking enormous interest in Andhra Pradesh. That is no news by now. The raids on the IT company IT Grids India Pvt Ltd for an alleged data breach is the latest and ongoing example of the lengths to which TRS is willing to go to help out YSR Congress Party and its chief Jagan Mohan Reddy.

But another equally important episode that escaped media attention was Jagan meeting up with Tridandi Srimannarayana China Jeeyar Swamy at the latter ashram at Muchintal near Shamshabad in Hyderabad on Saturday. Why did Jagan, along with his party leaders, suddenly visit the Swamy, now regarded as most the powerful religious figure with close political links in Telugu states?

Photographs published in Sakshi newspaper showed Jagan touching the feet of the China Jeeyar in great reverence. He sat in front of the Swamy and apparently listened to what China Jeeyar had to say about his activities and programs. He spent half-an-hour at the ashram.

China Jeeyar is now known as the official guru of the royal family of Telangana – KCR and his family. KCR even made him sit the CM’s chair in 2016 during the house-warming of the CM’s camp office at Begumpet. “Interestingly #Telangana CM KCR insisted that the seer Chinna Jeeyar sit on the CM’s chair first, took his blessings and then sat himself,” journalist TS Sudhir wrote.

China Jeeyar has emerged as the most influential advisor to KCR and his government. KCR is known to act in matters both personal and government on the advice of China Jeeyar.

So why did Jagan suddenly meet with China Jeeyar, the family guide and advisor to KCR? Obviously, there is more than meets the eye. Since KCR and his son KTR are now bent on running down Chandrababu Naidu, and working very hard to ensure Jagan’s victory in Andhra Pradesh, this meeting is anything but spiritual in its intent.

The usual suspects accompanied Jagan to the ashram. They were Vijaya Sai Reddy, Mithun Reddy and Balashouri. And an interesting addition was Narne Srinivasa Rao, who is Jr NTR’s father-in-law. He is also Chandrababu’s nephew.